Navigating the Self and Others through Contemplation: Teachings on Seven-Point Mind Training
with Geshe Sherab

Mind training (lojong) is a method for transforming our usual state of self-involvement into a more compassionate, big-hearted one in which we naturally hold others dear. This style of teaching uses down-to-earth language and actionable advice like these words from the Seven-Point Mind Training: “Do not be erratic”; “Do not underestimate your ability”; and “Be liberated by two: examination and analysis.” The Seven-Point Mind Training was compiled by Chekawa in the 12th century from the renowned teachings of the Indian meditation master Atisha. Join Geshe Sherab in a series of Friday teachings on this beloved text, which has inspired volumes of commentaries illuminating its wisdom. This is a special opportunity to receive a contemporary teaching on this classic mind training text. Come listen to these teachings, and learn how to take this pragmatic wisdom into your day-to-day life! 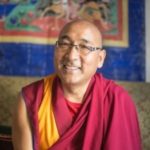 Geshe Thubten Sherab was born in 1967 in a small village in the province of Manang, the western part of Nepal, to a Kagyu-Nyingma family. He entered Kopan Monastery at the age of nine and completed his geshe studies at Sera Jey monastery in South India, followed by a year at Gyumed Tantric College. He then completed retreat and teaching assignments in the United States and Asia. Geshe Sherab served as headmaster of Kopan Monastery’s school for four years, overseeing debate training and tantric training activities. Geshe-la taught and helped in the FPMT International Office for two and a half years in Taos, New Mexico (2001–03) and also served as director of the FPMT board for a few years. For the last few years, Geshe-la has been traveling and teaching at FPMT centers in the United States, Canada, Mexico, Asia, and Europe, while also serving as resident teacher at Thubten Norbu Ling in Santa Fe, New Mexico.